FACTS is the ‘go-to’ company for providing customised and practical solutions for any query, big or small, to support our clients’ business plans for product quality, brand preservation and overall growth.

FACTS offers members of the food and allied industries great depth and breadth of knowledge within one company. We are an authentic, multidisciplinary and connected team of experts, with medical, food science, dietetic, genetic and commercial knowledge. Our synergy of skills allows us to offer unparalleled expertise in the analytical testing, nutritional, regulatory, advisory and educational domains and provides vital advantages to our clients.

We continually invest in our people, technology and partnerships to ensure that we sustain our solid foundation in scientific excellence. Our committed team of researchers has a strong presence in local and international networks and collaborative projects and represent a trusted scientific workforce, referenced by the academia, industry and government.

Cleaning validation and verification are fundamental components of effective food allergen control, and both are best supplemented with a...

15 October 2020
Cleaning validation and verification are fundamental components of effective food allergen control, and both are best supplemented with appropriate analysis. Verification testing should preferably be done on-site, which eliminates the time and financial constraints associated with laboratory-based methods. Rapid kits are ideal for on-site analysis because they are quick, mobile, cost-effective, require little technical skill to operate, and in most cases require no additional equipment. The FACTS team takes a closer look at the food industry’s responsibilities in terms of allergen control, validation and verification, and focuses on the different allergen rapid-kit systems for on-site testing that are available – including which important factors to consider when choosing a rapid kit.
[embed]https://youtu.be/O5Nzamh5wIc[/embed]
Europeans call them ‘Frankenfoods’, and Americans refer to them as ‘fishy’ foods. But scientists generally agree that GMOs are perfectly ...

13 October 2020
Europeans call them ‘Frankenfoods’, and Americans refer to them as ‘fishy’ foods. But scientists generally agree that GMOs are perfectly safe to consume, and in some instances can be beneficial to the environment. Why, then, is the public opposed to the production and consumption of GMOs?

What are the main concerns around the use of GMOs?

There have been many concerns raised over the use of GMOs, from their effects on health to potential threats to agriculture and socio-economics. These threats include (but are not limited to) their allergic potential, their adverse health effects, the unintentional spread of modified genetic material, the mutation and expression of genes, and the interaction of modified genetic material with unmodified genetic material. Socio-economically, smaller farmers may face the biggest risks. The increased use of GMOs may result in farmers losing access to plant materials, and so may allow big companies to gain a monopoly over agricultural production. The most common arguments are based on the risks of insecticidal and herbicide-resistant crops. Bacillus thuringiensis (Bt) is an endotoxin that acts as an insecticide. Bt spores produce crystalline proteins that are toxic. The toxin, known as Cry-protein, binds to selectively to a protein receptor in the gut. This selectivity allows for the use of Bt toxins as targeted insecticides – highly effective when controlling pests such as caterpillars, but harmless to other insects, such as bees, and also to humans when ingested. Bt crops require less conventional insecticide, and are therefore better for the environment. On the other hand, herbicide-resistant crops may result in increased use of glyphosate-containing herbicides (a common brand name is Roundup®). The herbicide-resistant trait of certain GMO crops allows farmers to use herbicides on an entire field, and only the weeds (that are not herbicide-resistant) will die. The concern over this GMO commodity is to do with inadvertent consumption of the product; activists argue that these herbicides are not washed off and may be ingested, and that excess glyphosate ends up in both the soil and the water table. In addition,  increased use of glyphosate may produce herbicide-resistant weeds; and the unintentional consumption thereof has been argued to cause cancer and other illnesses. One could argue that this is not a direct implication of the use of GMOs, but rather a shortcoming of modern agriculture.

Why do GMOs provoke an emotional reaction in the public? 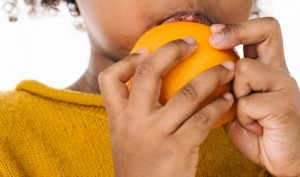 Psychologists attribute the distrust of GMOs to the perception that these foods are unnatural. Psychologist Paul Slovic found that when it comes to new technologies, we are more likely to make decisions based on our emotional responses than on evidence. Lack of familiarity with and understanding of GMOs results in public mistrust. Evidence suggests that anti-GMO arguments undermine consumer trust and ignite fear. This contributes to widening the divide between the perceived and actual risks of GMOs, and distracts from the opportunities they may offer when managed correctly.

Can we say that GMOs are good or bad?

GMOs are a complex topic that does not allow for the oversimplification of ‘good’ vs ‘bad’; but perhaps we should consider the ‘intention’ and the ‘action’ involved, to elicit a clearer distinction. ‘Intentions’ may largely be good – for example, to ensure that we produce adequate amounts of food, containing the necessary nutrients required, while maintaining efficient production. ‘Actions’ may be more difficult to define. To ensure that GMO use is well controlled, there are stringent rules that apply to GMO production to ensure that these crops are safe. For example, before a GMO product can be released onto the market, the GMO proteins are tested in a simulation of the human gut as well as on animals, to ensure that they cause no adverse effects. In addition, the agricultural practices that accompany the use of GMOs must be managed to ensure that the benefits outweigh the risks – for production, health, and our environment. Unfortunately, ‘GMO-free’ does not necessarily go hand-in-hand with more sustainable or ‘better’ crops. Understanding the risks and the benefits of GMOs to future human health may be easier to predict than what they entail for farmers and the environment. We require proper research and regulation, to ensure that consumers, farmers and the environment are all protected. In our next issue, we will focus on how GMOs are regulated and labelled in South Africa, and what the regulations require for GMO production.
With cane sugar getting a bad rap more than ever, the food industry is continually innovating to produce new alternatives. More and more ...

The sweet and murky waters of novel sugars and sweeteners

With cane sugar getting a bad rap more than ever, the food industry is continually innovating to produce new alternatives. More and more sugar replacements are making their appearance: monk fruit, coconut sugar, rice syrup and mesquite pod powder, to name but a few! Some call themselves ‘sugar alternatives’ or ‘natural sweeteners’. But can you claim they are ‘sugar free’, ‘natural sugar’, ‘natural sweetener’ or ‘non-artificial’ within the parameters of the law? Are these sweeteners even permitted for use in foodstuffs in South Africa? First, let’s look at a couple of definitions in our regulations: So, to use a product as a sweetener, it must be allowed by the GSFA. Products such as monk fruit have been approved by the US Food & Drug Administration; but as they have not been listed as permitted sweeteners in Codex, they are not acceptable sweetener(s) in South Africa. However, if a product is nutritive and imparts sweetness to a food product, it is considered an added sugar, e.g. coconut sugar, mesquite pod powder, rice syrup and other syrups and sugars. What about making claims? The ‘sugar free’ claim is only permitted if the product has been tested and proven to contain less than 0.5g total sugar per 100g final product – i.e. added sugar as well as sugars that are naturally present in the ingredients themselves. As a result, these sugar alternatives (or the products that contain them) cannot claim to be ‘sugar free’. The ‘no added sugar’ claim is not permitted for any product which contains an ingredient that meets the definition of ‘added sugar’, such as coconut sugar, rice syrup or fruit juice concentrate. ‘Natural’ is reserved for products that are “not the work of man or interfered with by man”; therefore, none of the sugars or sweeteners can be called a ‘natural’ sugar or sweetener. Although you may not label your product a sweetener unless it is listed in Codex as a sweetener, descriptive phrases such as ‘use as an alternative to sugar or honey’, ‘as sweet as sugar’ or ‘sweetens any dish’ are allowed, and may be the way to go when you are marketing your product. Innovation and regulations don’t always develop in parallel; but FACTS is here to assist you to navigate these murky waters. Contact us for regulatory assistance and training.